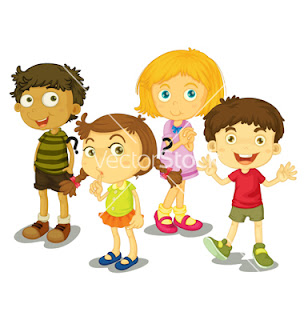 Time for me to say a word here. I've been very distracted lately, minding two of my grandsons for the summer. They are both good boys and pretty well-behaved (and that's not the "grammy" in me, it's true. They're good boys) and that's why I have to say something here today and get it off my chest!

I realize that not every child is outgoing and "never meets a stranger" but my oldest is. His younger brother is somewhat shy but will make friends easily enough. Today, I took them to swim at the community pool in our neighborhood. When we first got there, they had the pool to themselves and all was well. They played with their pool toys and everything was fine.

Soon, three boys came riding up on their bikes and came in to swim. My heart lept a little as I realized these fellas looked to be about "J"s age or maybe a little older. Great! He could make some new friends (as he always does) and they could all swim together. Not even close. While I held my book up to appear as if I were reading, I observed the three form a tightly closed group, obviously excluding my two boys. J would swim over to them and try to engage a couple of them in conversation, only to be completely ignored and, at one point, laughed at.

I tell you, it was all I could do to hold my tongue and not ask them if they would include my boys in their play but I kept out of it; still observing and listening.  Finally, I had to call J over and tell him that the boys wouldn't talk to him or acknowledge him because they wanted to play by themselves. The look on his face nearly stopped my heart and I was close to tears as he looked at me and said, "I get it. They don't like me."

I immediately put that idea to rest, assuring him that they were just already friends and probably didn't want to make a new friend today (or some other equally lame excuse). He went back into the water for a while, keeping to himself as the other boys swam around him, laughing and playing and splashing. Finally, J climbed out of the pool. I knew what was coming. "Let's go, Grammy. I'm done swimming." he said. His younger brother, oblivious to what was going on, obediently climbed out, wrapped himself up in a towel as did his older brother and they both sat on pool chairs, watching the group, while I gathered my things.

We left the pool area and began the walk home. You would have thought it was a scene out of "Dead Man Walking", the way he shuffled his feet, eyes on the ground. I know his little heart was hurting and there was nothing I could say to make it better. Believe me, I had plenty I could've said about those three boys, but I didn't. I chose to try and use that as a lesson to J that, in the future, when he was somewhere and someone looked like they felt left out or excluded, he would remember what that felt like and try to make friends with them and invite them to join him.

He nodded and said he would remember. I have no doubt he will.

I know "kids can be cruel", this goes on every single day and most kids get over it.I was young once (yes I was, stop laughing!) and I remember what that felt like. I raised three kids and I recall much the same words and looks when one of them was excluded from a group. It broke my heart then and it still does to this day.

My point? How hard would it be to teach your children and grandchildren to be a friend to all?

Just my two cents...
'til next time,
Pam